Do I have your attention?

Pecan pie is a favorite in the South.
I've never eaten one I didn't like.

In the Delta, we pronounce this rich, buttery flavored nut
"peh-kahn."

I think it's because there's an obvious joke about the latter pronounciation--
one I won't go into here!

Pecans are native to the United States, especially the South.
They were consumed and traded by Native Americans when the first explorers arrived.
European countries got their first taste of the nut
sometime in the 16th century.

Because the pecan tree grows wild in the South,
pecans are often the first choice for many of our recipes.

Farmers in this area often left the pecan trees in their cleared fields,
where tenant farmers and friends spent hours "picking up pecans"
off the ground for their winter treats.

One tree can provide several gallons of shelled pecans.
Extra shelled nut meats freeze well, so they are always handy for baking.

Enough history?
Ready for the recipes?

I found this recipe tucked inside my Grandmother's White House Cookbook.
I'm sure she used it. She never saved any recipe unless it was good.
I have a suspicion this particular recipe came out
sometime during the Depression, since there's so few ingredients
and since this is a very old piece of cardboard the recipe is printed on.
Or, it could have come out in the 1940s, when butter was rationed? 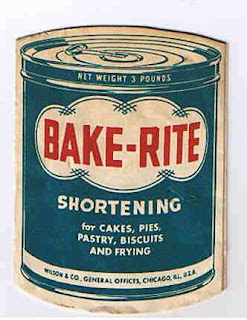 I searched the web for Crustine Shortening
but could find no reference to it.
I did find that Bake-Rite was a shortening
that was often used during that time period.

I have to admit, I've never baked a pie from this recipe.
But, like I said,
Grandmother wouldn't have kept it if it wasn't a good one.
Most recipes she just kept in her head. 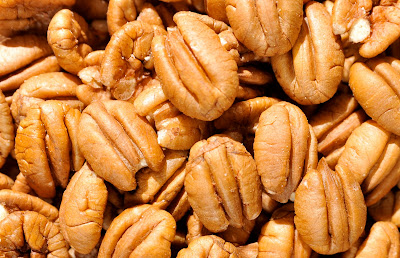 My Mom had her own favorite recipe
that she perfected over the years.
She was known all over town for her delicious pecan pie.
It was basically the same recipe as Grandmother's,
except she made a larger pie,
and she substituted butter for the shortening.

Beat eggs with a whisk. Add remaining ingredients.
Top with a few whole pecans.
Bake in a prepared, uncooked pie crust at 350 degrees
until done in the center and edges are browned.
Do not overcook.

Mom's Pecan pie was one of my favorites, but over the years,
I developed an allergy to corn syrup and corn starch.
With a little research, I found an alternative--
a pecan pie made with buttermilk.


It's much simpler. Tastes great. And, it's not as syrupy sweet.

So, here's the last of three generations of Pecan Pie recipes. . .

Whisk together 3 Eggs in a bowl. Add 1 1/2 cups Sugar and 2 tablespoons Flour. Whisk. Then add 8 tablespoons softened Butter, 1/4 cup Buttermilk and 1 teaspoon Vanilla Extract. Whisk. Place 1 cup Chopped Pecans in the bottom of an uncooked Pie Crust (the refrigerated pie crusts are the best). Pour egg mixture over it. Take  Whole Pecans and place on top. Bake at 350-375 degrees for about an hour or until pie is set in the middle and the crust begins to brown. 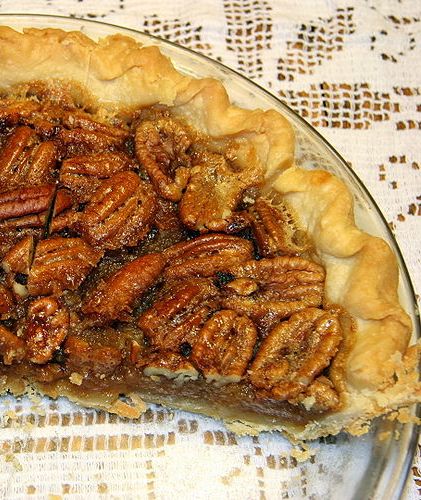 Grab a bag of "peh-kahns" and join us!

My mother makes pecan pies. She even makes them for another family at their request during Holiday season.

I do make pecan pie - mine is a chocolate version. I had a friend that once said she had to bake a pie for a neighborhood contest (she's not a baker) and she asked for a recipe. That's the one I gave her and she won the contest. Too funny. Yours looks delicious! And I would've had no idea what crustine was - never heard of it before now!

Yum, what a beautiful pie & thanks for the recipe!

Doll in the Looking Glass said...

Oh yum! I'll bring a pot of tea and be right over for a slice of your pecan pie.

YuMmY yUmMy for my TuMmY tUmMy! =)

A beautiful pie! Thanks so much for sharing the recipe at RT this week. xoxo

Now you're talking my language! Pecan pie is my favorite. My mothers was to die for. My kids think mine is fab, but don't tell them that my crust doesn't hole a candle to hers. I am making two Pecan pies on Tuesday for a ladies ward social at my home. My moms recipe is a bit different. It has dark karo. I may have to make one with hers and one with your moms. Anyway you look at it Pecan pie is good! Thanks for sharing with Share Your Cup!
Hugs,
Jann

I do have a favorite pecan pie recipe that I developed that eliminates corn syrup but I must try your recipe that uses buttermilk. It looks so good