BEFORE AND AFTER SERIES: The Farmhouse Living Room Part I Do you remember my post THE FUN IS IN THE LIVING ROOM PLANNING? At the time I knew I wanted certain elements in the LIVING ROOM but had no idea how it would evolve.

Taking my cue from our COTTON FARM, I also knew I wanted NEUTRALS, including the black touches I had in the kitchen. . .Our home has very few rooms, so COLORS and TEXTURES needed to flow from one room to the other. . .For the ACCENT COLOR, it was a 'no-brainer'. . .DENIM BLUES were my pick. 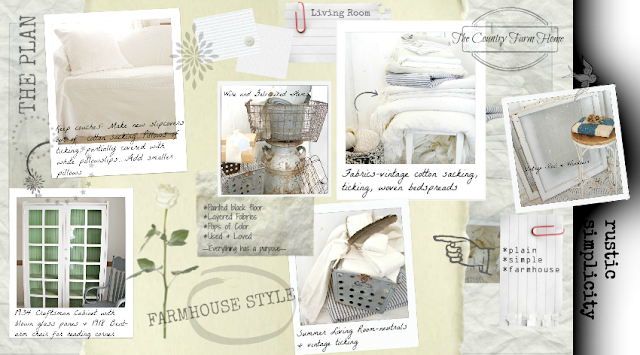 In the beginning I had no idea my journey would take me to PLAIN AND SIMPLE FARMHOUSE STYLE. . .That came later. . .Although I had grown tired of clutter, it didn't dawn on me until I began blogging in 2011 that I desired a simpler life, as well as a simpler style. . .It's hard to part with familiar items. . .and at that time, I didn't know I was ready for it. . .

The actual LIVING ROOM RENOVATION started a year or so before we moved into the house. . .I probably have less photos of that time than any of the other rooms. . .It was before a digital camera. . .How quickly I forgot what it was like in those days of an automatic 35mm camera. . .Indoor photos were hard to achieve. . .Nothing like today with the digital photographic capabilities.

Everyone knows it's a lot easier to PLASTER and PAINT without much furniture underfoot. . .so that was our first task. . .I chose a CREAMY WHITE for the ceiling and a SOFT WHITE for the walls. . .just the opposite of the kitchen, which you'll see later. . .I took those colors from the beautiful STAINED GLASS LIGHT FIXTURES. . .We found those fixtures by chance but once I saw them, I knew they had to go in the living room. . .The house is in a CRAFTSMAN STYLE and the fixtures were reminiscent of TIFFANY GLASS that was so popular in the 1930s. . .There was no doubt they were coming home with us. . . 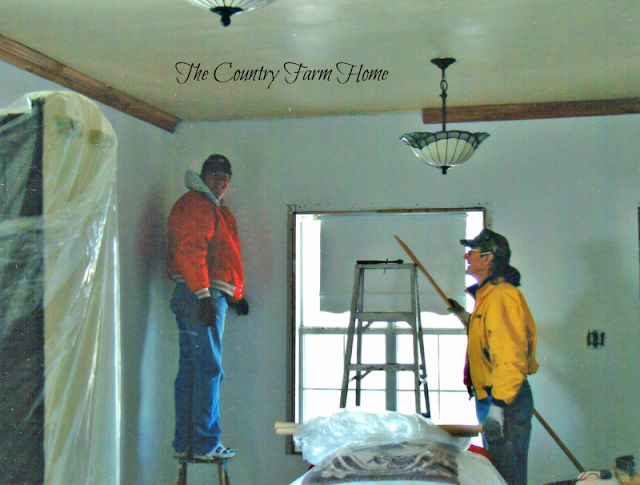 Once the painting was done, our next project was CROWN MOLDING and CHAIR RAIL that fit into the Craftsman style. . .We had to use chair rail to cover up the flaws in the sheetrock where the old seams joined. . .It was one very COLD winter's weekend that John and my cousin added those details. . .In fact, there is snow on the ground outside the window. . .and no heat to speak of in the entire house. . .It took a couple of brave hearts to tackle this one. . . 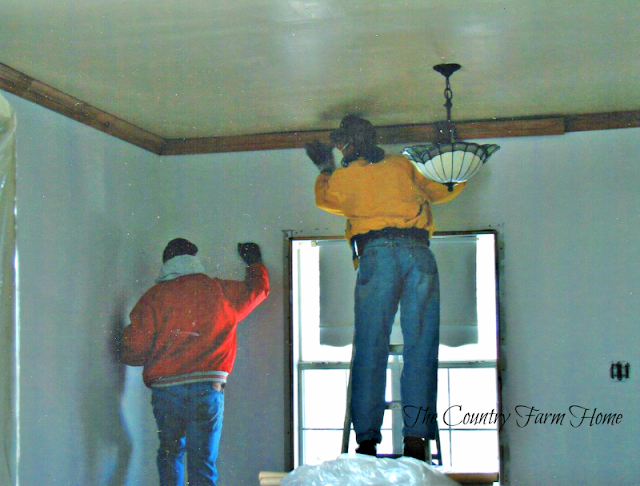 That done. . .John began to replace the WINDOW and DOOR FACINGS with a few subtle changes. . .the addition of GROOVED LUMBER to make the look a little more formal. . . I believe this was about the time that I began my quest for PLAIN AND SIMPLE. . . 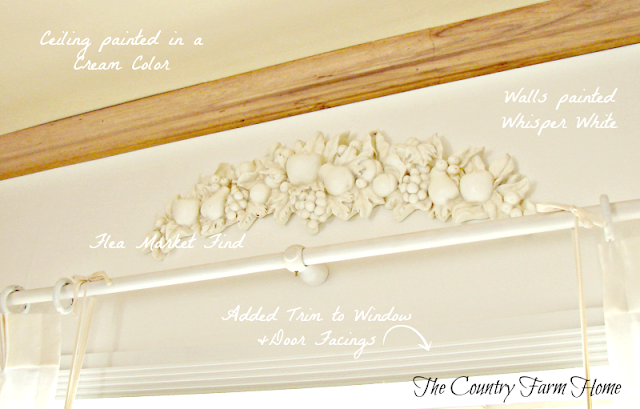 Next. . .the FLOOR was sanded and refinished. . .We had discovered the 1930's tongue and groove flooring under the shag carpet that was down when we first took over the house. . .The PATINA was so nice that we wanted to preserve it. . .a decision we would change in years to come. . . 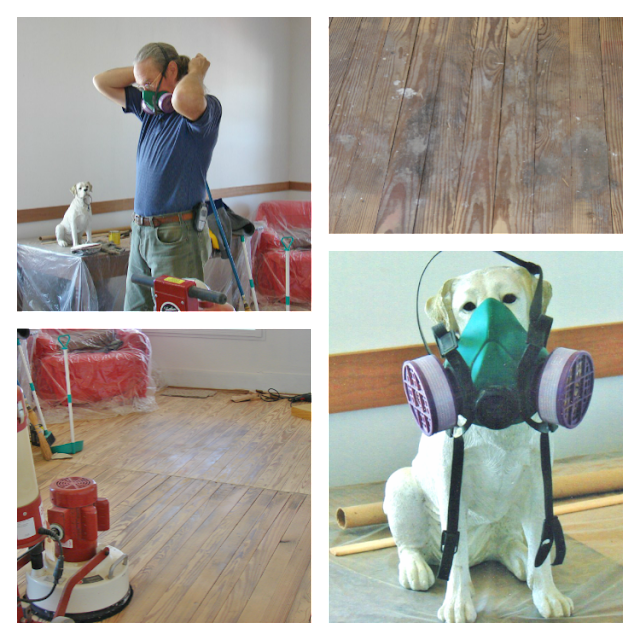 John did a fantastic job of sanding out the stains and wear. . . 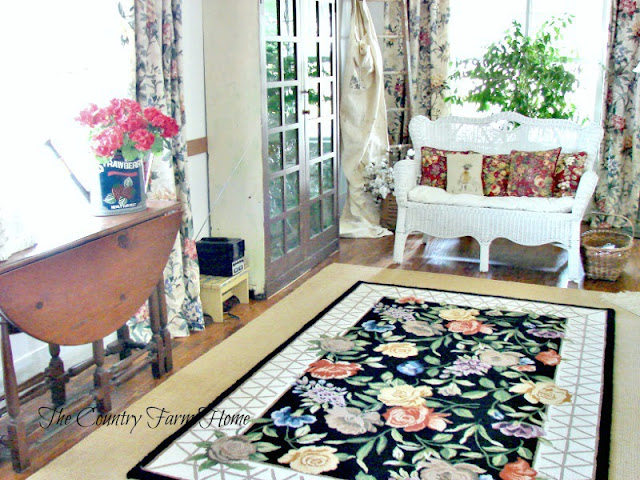 Finally the BIG DAY came. . . We could move into the house. . .The kitchen and keeping room was still in it's beginning stages but I could make quick meals. . .and we had a living room and bath that was functional if not finished.

We had little furniture brought from Virginia. . .Making-do began as we moved a COUCH AND CHAIR from my parents home. . .as well as other ACCESSORIES. . .They weren't to be anything but TEMPORARY. 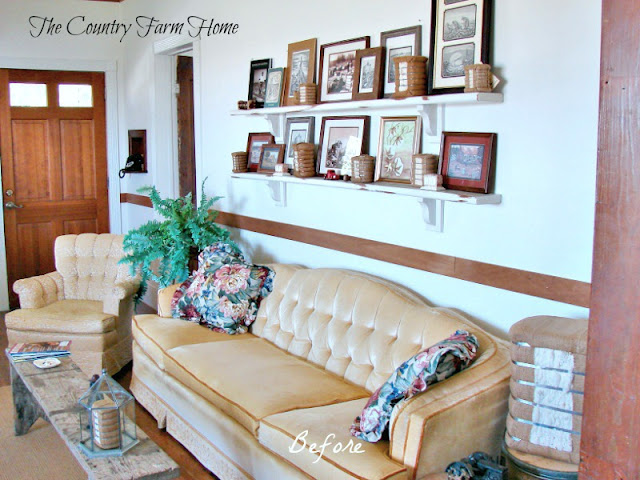 That poor couch was so old that the springs and cushions were soft. . .yet it served our purpose until we could replace it. . .

The brown painted 1930s CABINET was purchased in Tennessee a long time before we started the living room. . .The panes are BLOWN GLASS. . .LOVE at first site. . .but it did look much better once painted. . . 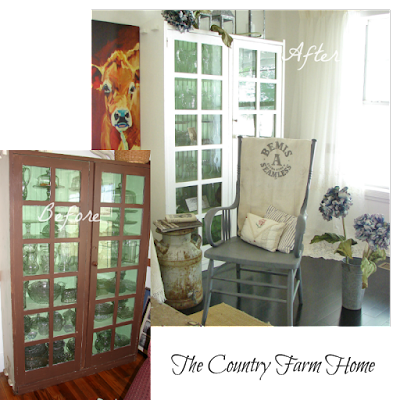 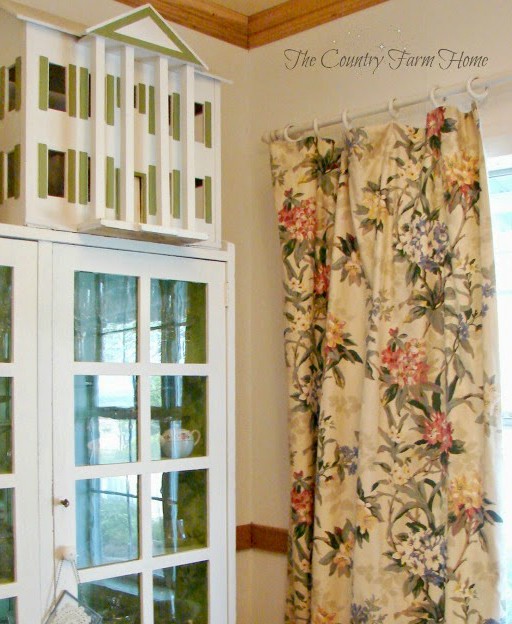 The heavy DRAPES had to go eventually. . .I have never liked drapes and prefer the windows to be open to light. . .In our rural setting, we didn't need a lot of window coverings for privacy. . .I did find some beautiful EMBROIDERED SHEERS at the family home in Dell. . .It wasn't long until the vintage drapes were replaced. . . 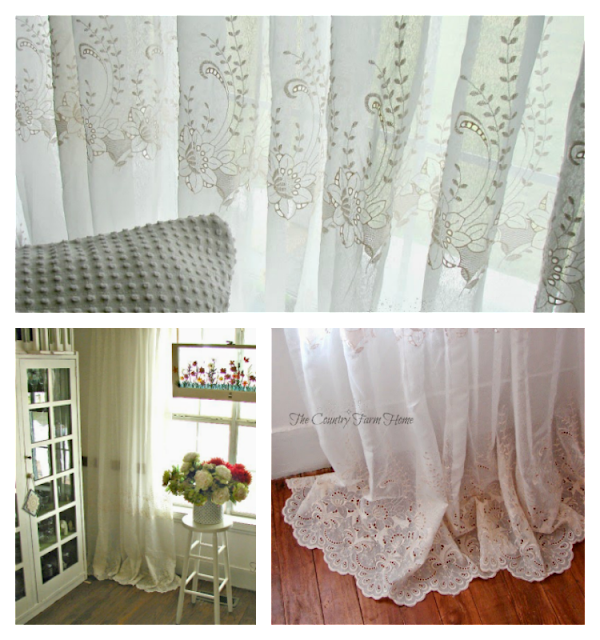 Much better, don't you think? . .They were a little long at the front window, so I decided to let them POOL on the floor. . .something I'd never done before but found it a very pleasing affect. . .especially once the black floor went down a few years later. . . 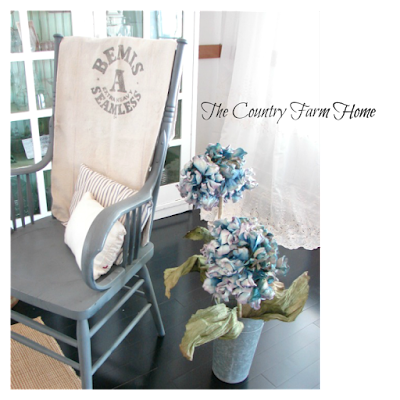 We lived pretty much the same for several years. . .replacing the couch with two mismatched ones. . .That's when I discovered THROWS. . .So easy to pull off and wash frequently. . .Dust and dirt are a reality on a FARM. . . .plus, they helped cover up the fact that the couches were different. . .I considered making slipcovers more than once but knew that one day I'd find that  PERFECT set of couches. . .I did order one slipcover but it didn't fit as well as I wanted. . .Throws would be fine. . .and still are. . .as you'll see. . . 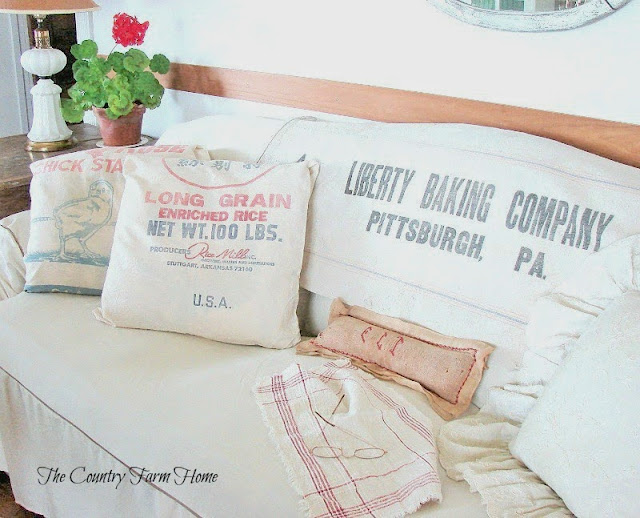 After spending several very COLD WINTERS in the living room, it became apparent that we needed another floor on top of the existing one. . .We shopped and shopped for WOOD FLOORING that would not make the house look like a patchwork of floors. . .Matching the other floors was not possible. . .Should we go lighter? Darker? Wide boards? Skinny boards? . .Nothing pleased us. . .At least nothing that warranted the investment. . .We didn't want a floor that cost several thousand dollars to be one we weren't happy with. . .Then one day we stopped in at a discount flooring store in Missouri. . .We looked and looked. . .had decided on a floor 'that would work' . .Still nothing that got my HEART POUNDING. . .But we needed a floor. . .I could live with it. . .I thought. . .While figuring the number of boxes needed, the owner said he had BLACK flooring he'd sell me cheap, cheap. . .He wanted rid of it. . .He was half-way kidding but something within me got excited. . .We came back home with enough BLACK FLOORING to not only cover the living room floor, but also the bedroom floor. . .John started putting it down the next day. . . 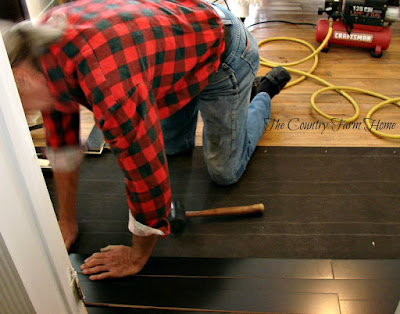 I couldn't have been more pleased. . .The boards were as narrow as the old floor, so it appears that we simply PAINTED it. . .I can't help but smile now when I see black flooring as a common choice for many decorators nowadays. . .I sometimes wonder if the gentleman regrets selling us all of the black he had? . .We had been at the right place at the right time for sure.

Now the living room was ready for some serious STYLING. . .finally. . .I never dreamed the final outcome would take the path it did. . .not in the beginning. . .I do feel I've been on a JOURNEY. . .trying certain looks. . .keeping what I liked. . .changing what I didn't.  . .There's been a definite evolution. . . 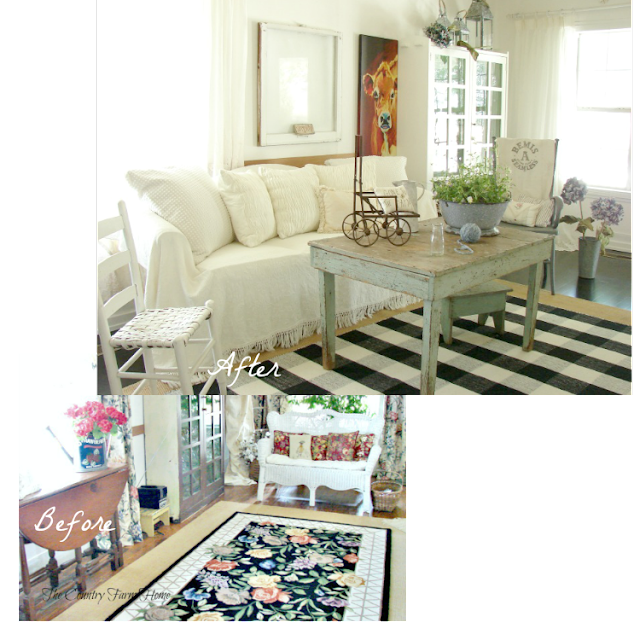 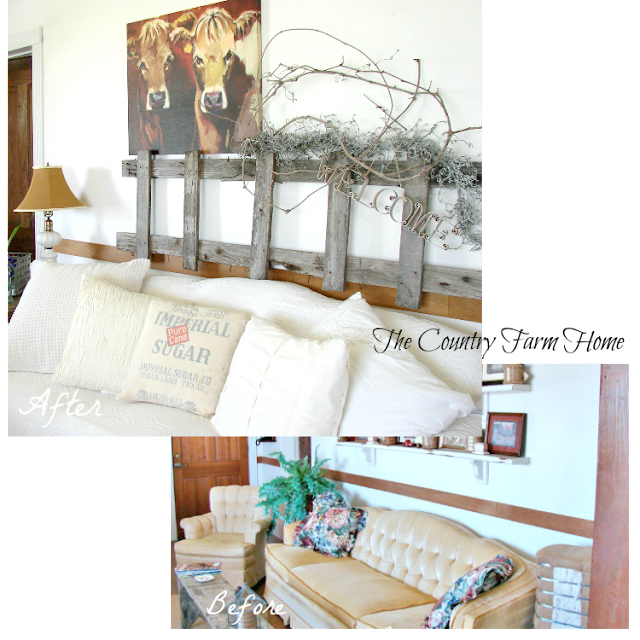 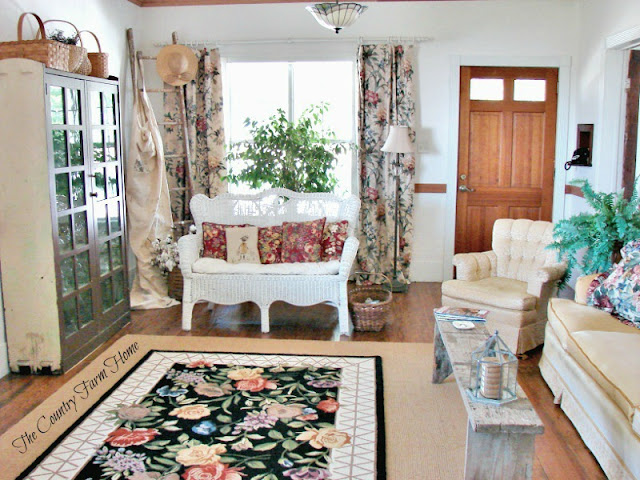 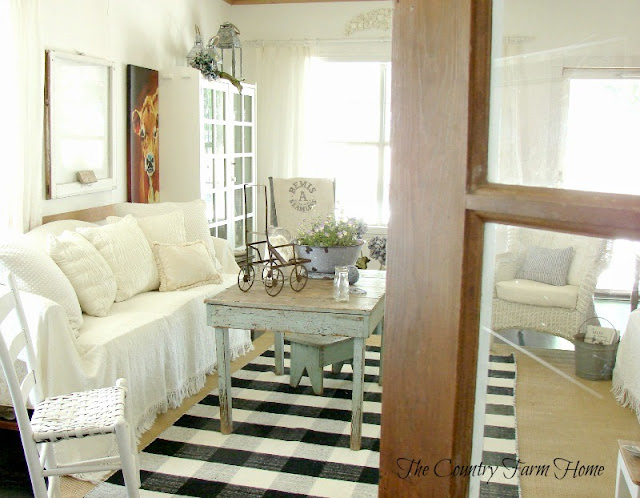 Coming up in PART II, I'll have many, many more AFTER images. . .In fact, the entire post will be dedicated to the PRESENT. . .Knowing this background will make that story all the better. . .As I've shown in this post, RENOVATION AND DECORATING doesn't just happen. . .and maybe not quickly. . .but once finished, the time and work are worth it. . .Sometimes, though, that's hard to remember. . .Anyone who has lived in a house in perpetual renovation knows that only PATIENCE and hanging onto a VISION will keep you sane. . . 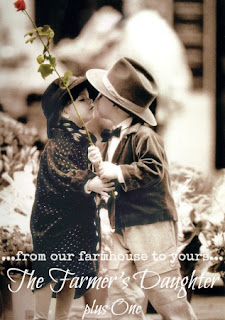 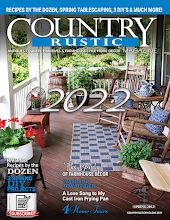