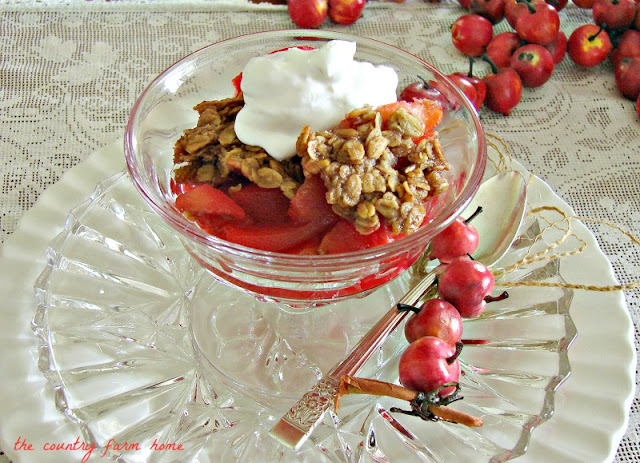 I haven't had a red candy apple like you get at the fair in years, but I've been told that they don't have the cinnamon flavoring in them that they once had when I was growing up.
But, if you're like me--and you remember and love those cinnamon-y fair apples on a stick--
or, if you like the taste of sweetness and cinnamon--
I have a treat for you today. . . .
courtesy of my Grandmother Magers. . . . 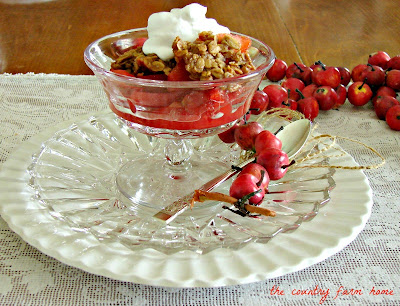 Years ago she jotted down the following recipe on the inside cover
of her White House Cookbook.

I think I've told you before that
Grandmother never measured anything, unless it was absolutely necessary.
She just added here and there until it looked right.
And, she rarely wrote down a recipe.
If she did, it read something like this one:

Got it?
Or, would you like a translation?
I wrote it out--with directions--
when I was a teenager, learning to cook-- 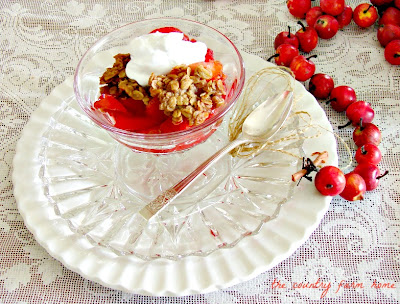 Sprinkle the oat mixture evenly over the top.
Bake at 350 degrees until apples are done and the liquid has thickened--
Grandmother lightly covered the pie with foil for about 20-30 minutes,
then uncovered it the remainder of the time--
to be sure the apples cooked quickly
and the topping didn't brown too fast. 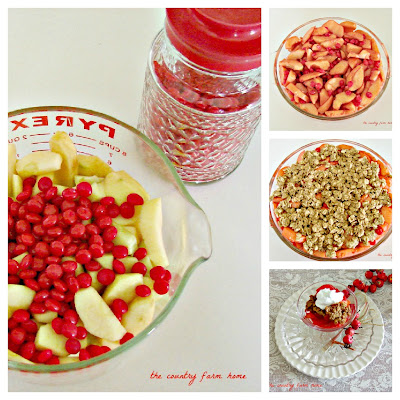 Delicious hot or cold--
With or without whipped cream or ice cream. . . 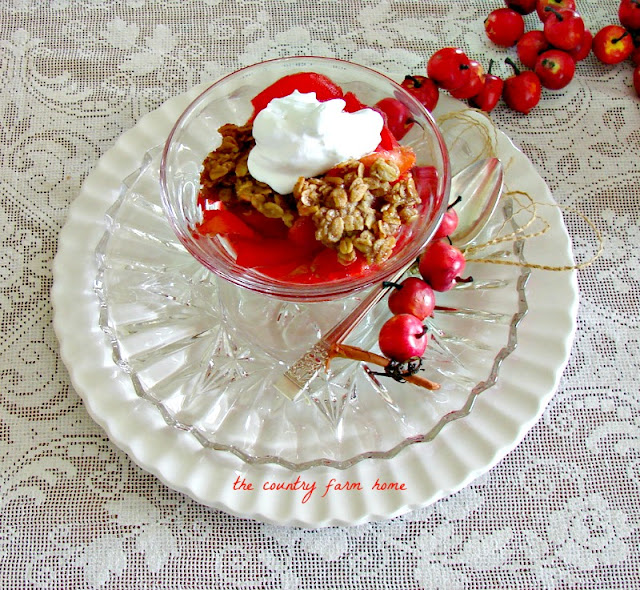 Every year, this was the first pie made with apples from Grandmother's trees. It was as sure a sign that fall was here as the leaves turning red and gold and the days becoming cooler. When our own tree produced it's first apples this year, I got out Grandmother's recipe and whipped up her special dessert. It was as delicious as I remembered. . . . I knew for sure. . . . . It Must Be Fall . . . . .


Hope you'll enjoy Grandmother's Deep Dish Candy Apple Crisp. . . .
It's the next best thing to a red candy apple on a stick. . .

OOOHHHH! it looks so yummy! i would like to try it! great photos too, it really captures the look

OH that looks like a great recipe! Your pictures are wonderful....

That looks great! Thanks for your recipe!!!

Oh...that looks so yummy!! Thanks for sharing your recipe. My mom gave me all my grandma's recipes...my favorite is her cutout sugar cookie recipe that she made up herself. I make them for every season.

Since I do not cook much anymore, this really looks tasty and tempting.

I love your photos. They make your recipe look scrumptious! How nice to have your grandma's recipe.

Here's to autumn with its lovely aromas, coolness, and memories.

I love this post! Looks SO yummy. New fan here and I hope I can persuade you to come share this post at my Farm Girl Friday Blog Fest: http://fresh-eggs-daily.blogspot.com/2012/09/farm-girl-friday-blog-fest-2.html

Hello! I’m stopping in to invite you to join us at the Clever Chicks Blog Hop this week!
http://www.the-chicken-chick.com/2012/11/clever-chicks-blog-hop-7-country-craft.html

I hope to see you there!
Cheers!
Kathy
The Chicken Chick

It looks tasty! What is the total cook time?