Blue and White Ironstone for the 21st or 18th Century? 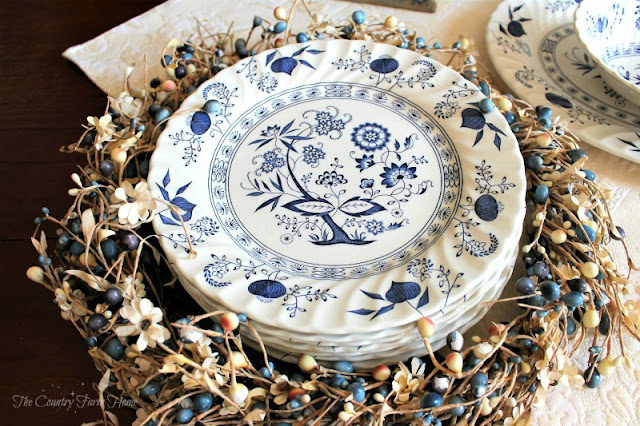 “Is there anything prettier than blue and white dinnerware on a dining table?” I asked my friend as we shopped the local thrift store.

“Hummm. . .Wouldn’t this pattern go well with your colonial home in Missouri, since you already have a lot of blue and white there,” she asked as she picked up a piece I recognized as Blue Onion. I also noticed the price tag. . . $10 for the set. 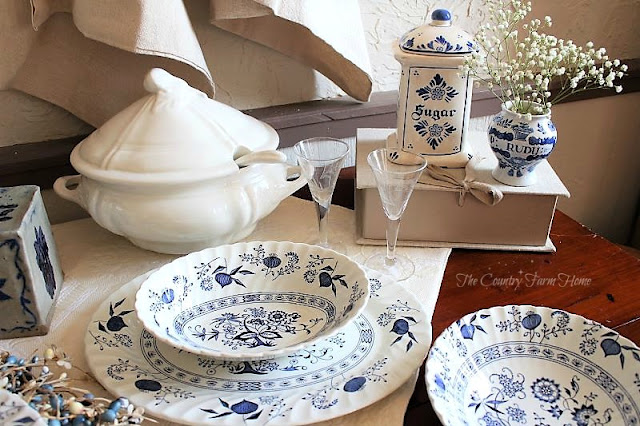 I looked closer. I had never thought about the possibility that the Blue Onion design dated back to the 18th century. I have collected random pieces of that pattern for forty years. . .and thought it was more of a 20th century design. . .But she was right. . .the floral artwork definitely looked inspired by similar 18th century flowers I had seen in fabrics and paintings.

The first thing I did when I arrived home was search for the Blue Onion pattern history on the net. . .To my surprise, the pattern dated back to 1740 when the Meissen factory in England modeled the work of Chinese porcelain painters. . .but making it their own with some changes. . . .For the next 200 plus years, other porcelain factories also copied the Meissen dinnerware. . .which is why I was familiar with it. . . 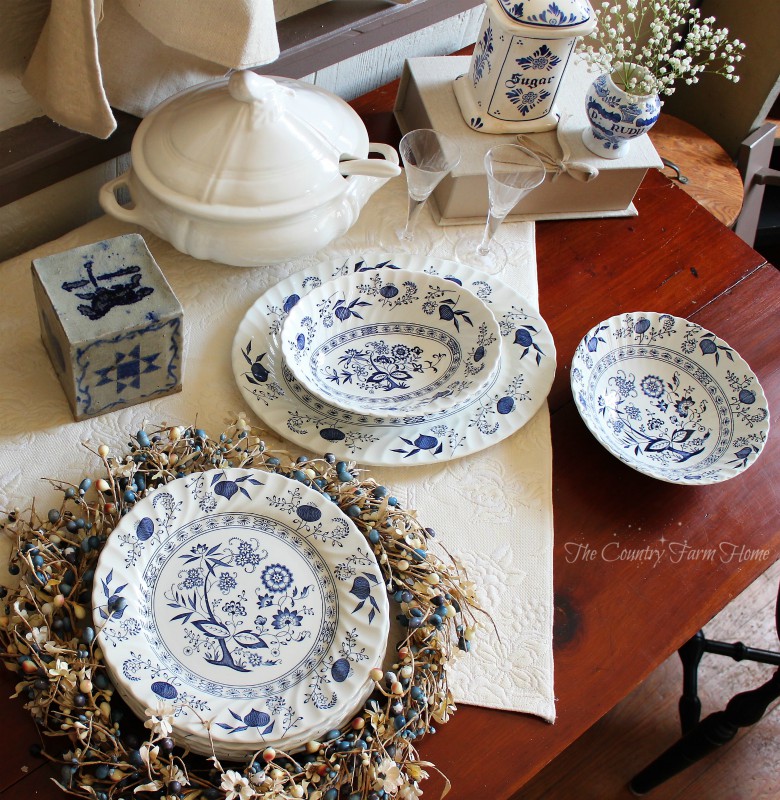 I searched more to find that the $10 set I bought wasn’t that old and that the pattern isn’t even called Blue Onion. . . .Most factories changed the name from the original, but no matter the name, most know it as Blue Onion. . .The factory mark on the back reads:

Now I have a decision to make. . .Keep the beautiful blue and white at the summer farm. . .or take it to our second home for colonial dinners there?. . .Looks like whether we are living in the 21st century or the 18th century. . .this age-old popular pattern will be at home in either place. . .

For more on the history of the Blue Onion Pattern, go to:
OUR BLUE ONION TABLEWARE--A 279 YEAR OLD PATTERN 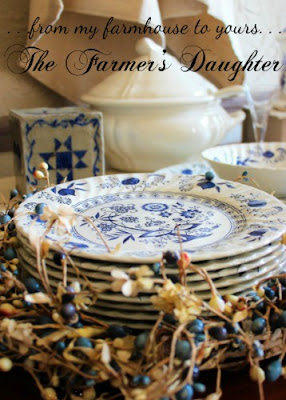 A Kitchen Pantry In The Makings 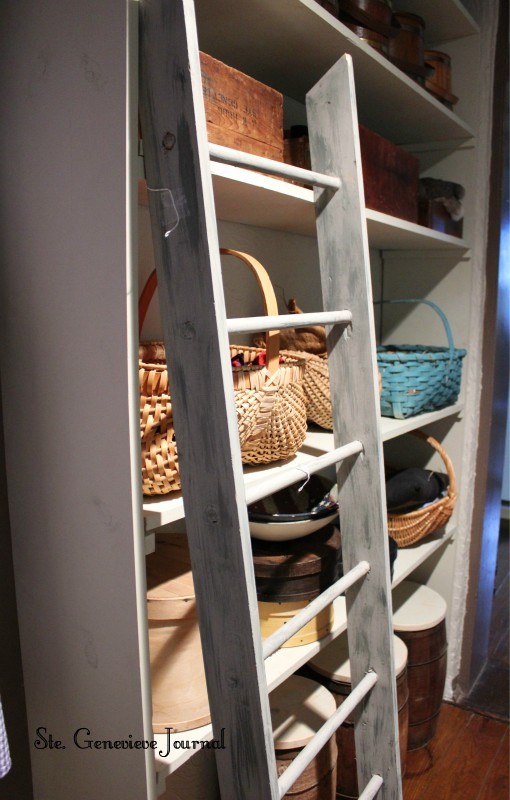 I'm a Farmer's Daughter. . .and by this time in Winter, I am more than ready to be out in the sunshine of Spring with the dirt between my toes. . .But. . .That's not gonna happen for a while, so we started another project at our Ste. Genevieve home in Missouri. . .a PANTRY for the kitchen. . . 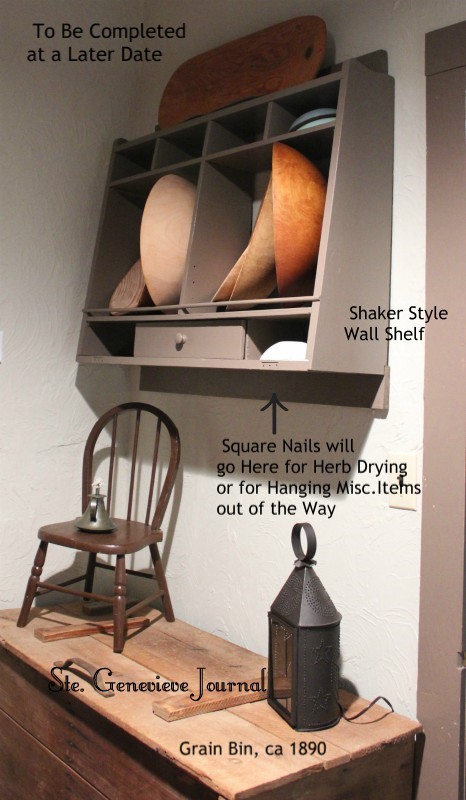 Although the decor of our second home will be 18th century colonial, it suddenly dawned on me that the way the pantry is shaping up, it would fit into any FARMHOUSE decor, too. . .PLAIN AND SIMPLE STYLE  rings true, even in our 1830-60s home. . .You might be surprised how close to our farmhouse style is carried over. . .right down to a checkerboard floor (in future months). . .But, for now,  I decided to share how the KITCHEN PANTRY is shaping up. . .Maybe it will inspire you to find a place for a pantry in your home. . . 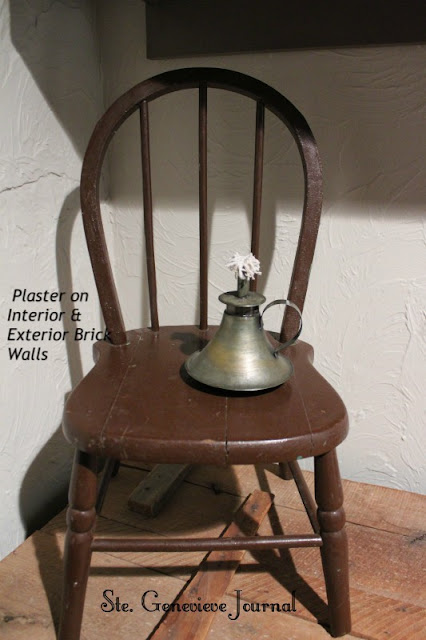 To see BEFORE PHOTOS and READ MORE about this project. . .CLICK HERE

Something I have learned through writing for a magazine. . .it totally changes the way the seasons are celebrated at THE COUNTRY FARM HOME because of the deadlines that have to be made. . .When it’s 105 degrees outside, I’m setting up Christmas trees and wondering how to get snow outdoors in the very green grass. . .Or, when it’s the holidays, I’m working on a story and photos for the next Spring. . .Physically and mentally I have to be a season or two ahead. . .and so it is with these Delta Angels that will appear in the 2019 Holiday edition of COUNTRY RUSTIC MAGAZINE. . .

But. . .it occurred to me as I dressed and embellished the ones here, that they shouldn’t just be for Christmas. . .We need angels the year round, don’t we? 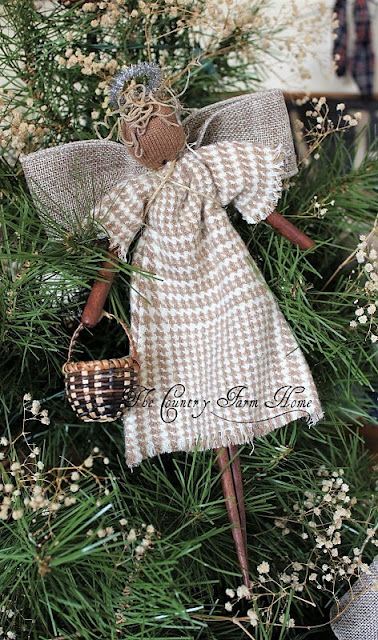 I have made larger versions of my Delta Angels for years. . .(SEE. . .HERE and HERE ) and named them after those women who have influenced my life the most. . . 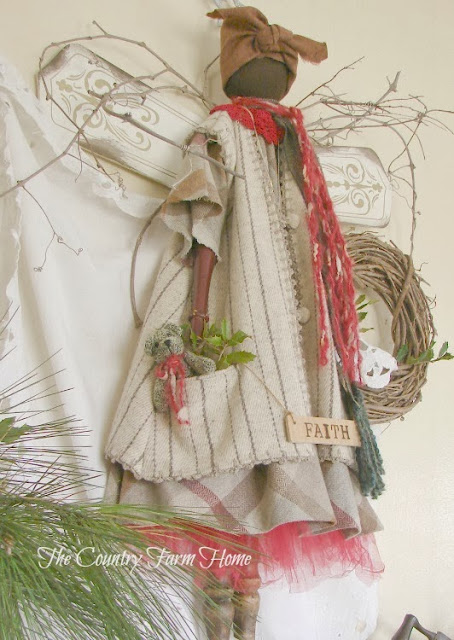 I plan to do the same with these smaller, ornamental angels. . .and to make them throughout the year for each season. . .The ones you see here are for the WINTER. . .before and after Christmas. . .Easily made. . .but I can’t divulged the how-to right now. . .The instructions will be out next Fall. . .This is just a little sneak peak to see what you think. . . 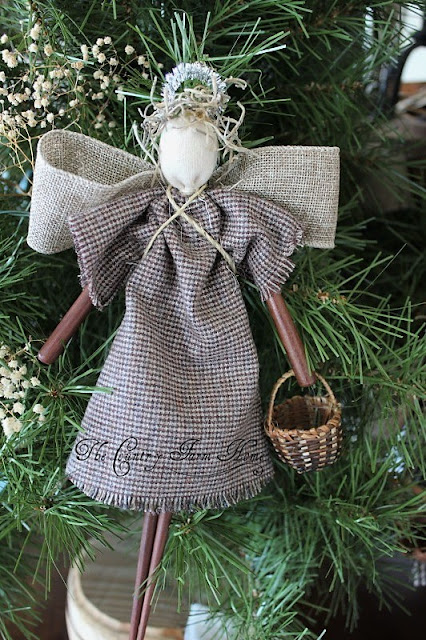 I will say that the materials used are chop sticks, wooden squares, socks, wool fabric, hemp string, ribbon, and embellishments. . .They take about ten minutes to complete one from scratch. . .and a good project for kids, too. . .If you personalize each one with a name, it will remind you of those you hold dear. . . 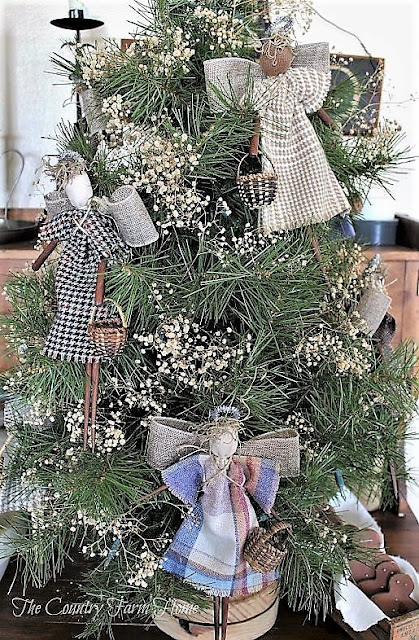 If you are very crafty, you can probably figure out how to make them yourself. . .or at least your version of it. . .If you’re not, I’m afraid you’ll have to wait a while for instructions. . .but in the meantime, watch for each new one in my blogs as the 2019 SEASONS change. . .I hope they will inspire you. . .and will be a reminder of the real ANGELS that are truly with you each day of the year. . .

Posted by The Farmers Daughter 3 comments: