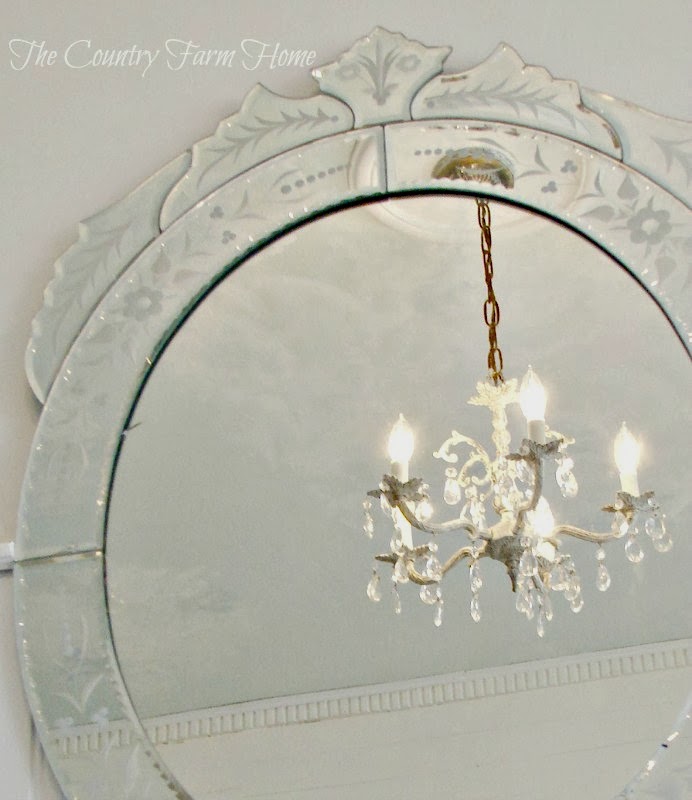 Where's the fun in decorating if you stick to the rules all the time? . . . .None. . . .I'm so very glad the rules have relaxed since the days when Mom and her lady friends kept house. . . .They never would have placed a chandelier in a plain farmhouse bathroom.

Nor would they have painted the ceiling sky blue with clouds floating by. . . . 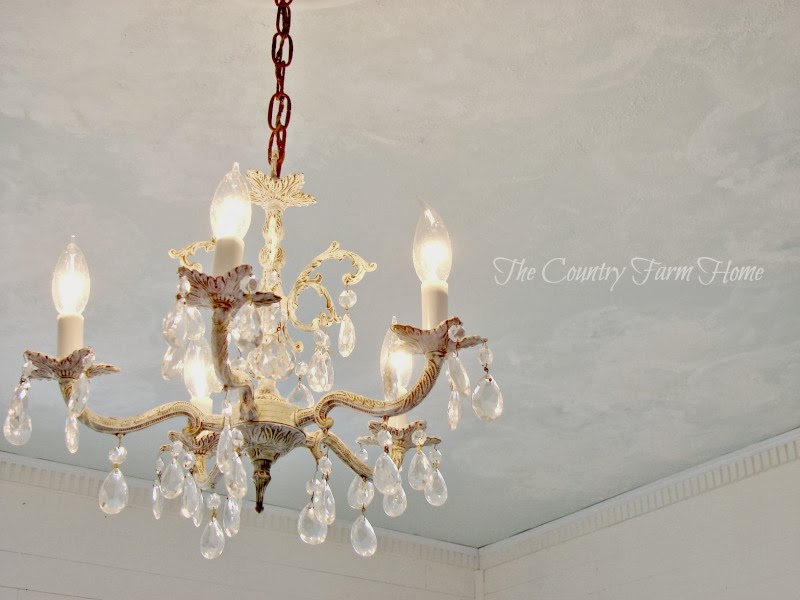 Eight years ago when we renovated the manager's home--our farmhouse--I wish you could have seen the look on the contractor's face when I brought in a chandelier for the bath. . . .We had installed a 1927 tub, a sink in a vintage dresser, a 1930s cabinet for toiletries--all elements that he was able to accept for a vintage farmhouse bath. . . .but, 'a chandelier?' . . . .I could hear his mind questioning my decision. 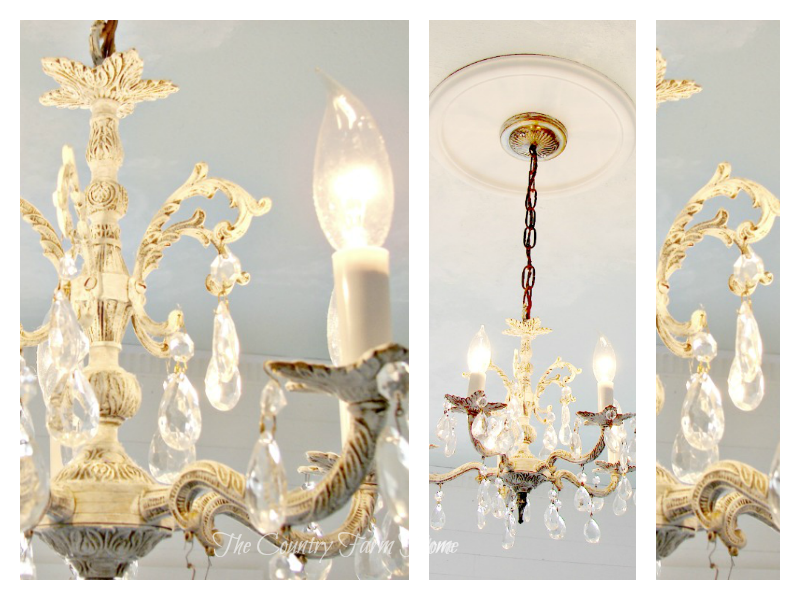 I waited a few days before I broke the news to him that I wanted the ceiling painted light blue. . . .figured I'd let him get comfortable with the chandelier idea first. . . . 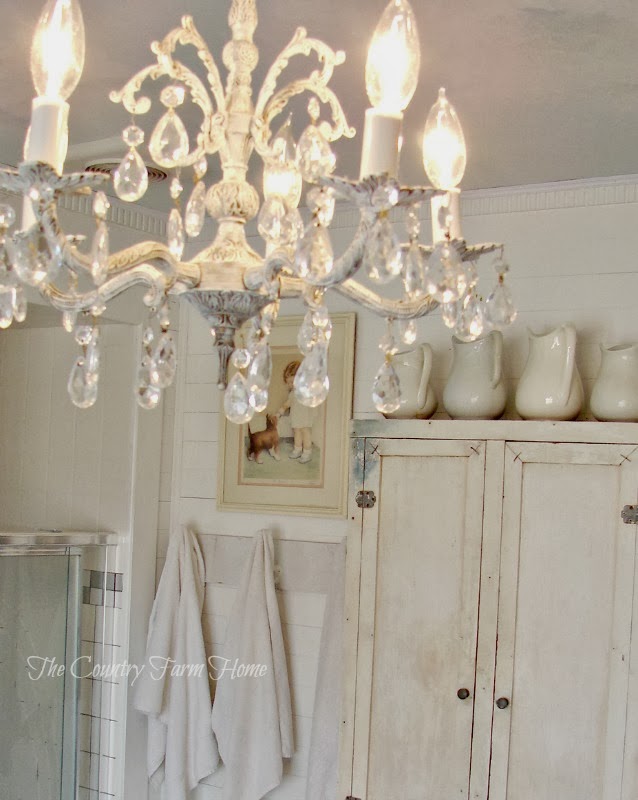 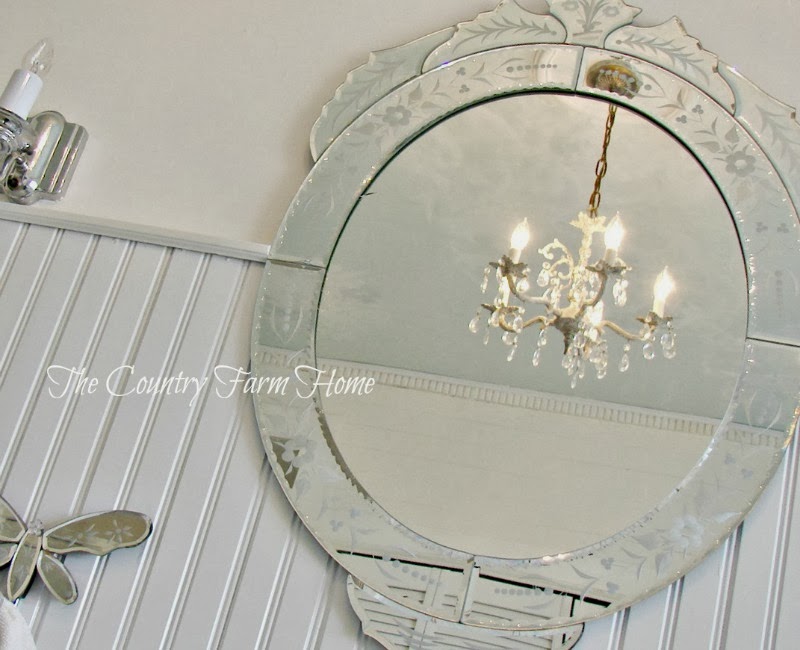 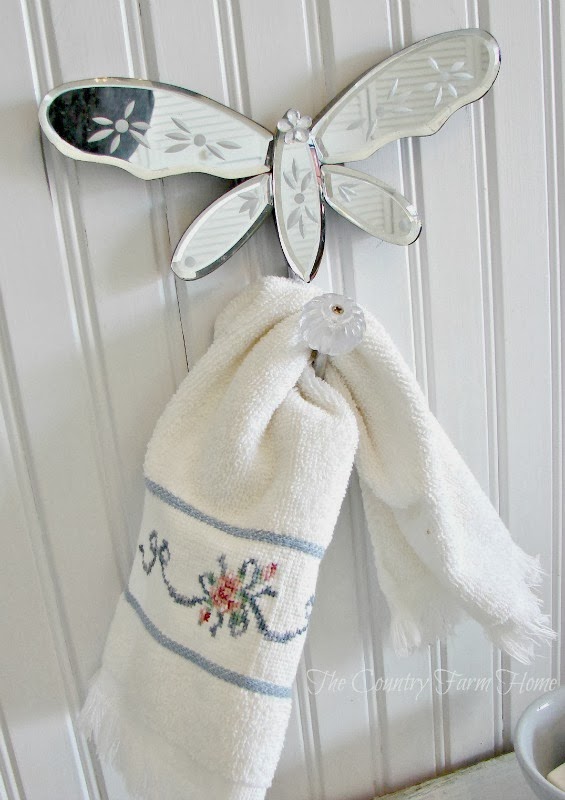 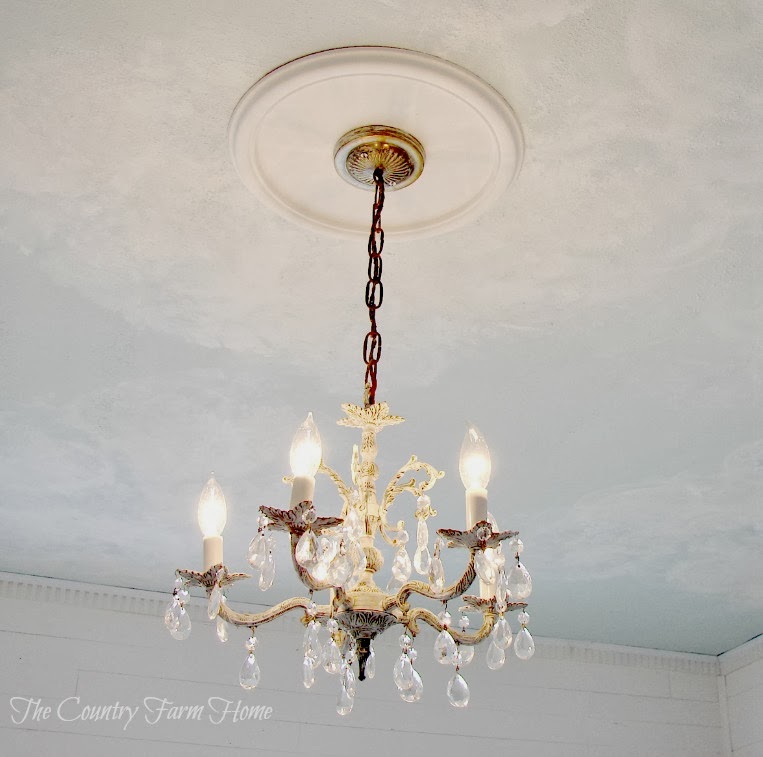 I shocked a few more people along the way, too. . . .Clouds and chandeliers were not what they expected in this plain and simple farmhouse at all. . . .Across the country Shabby Chic was popular. . . .Not so much here in the Delta. . . .not eight years ago.

I loved watching people's faces when I'd show off our new home. . . .priceless. 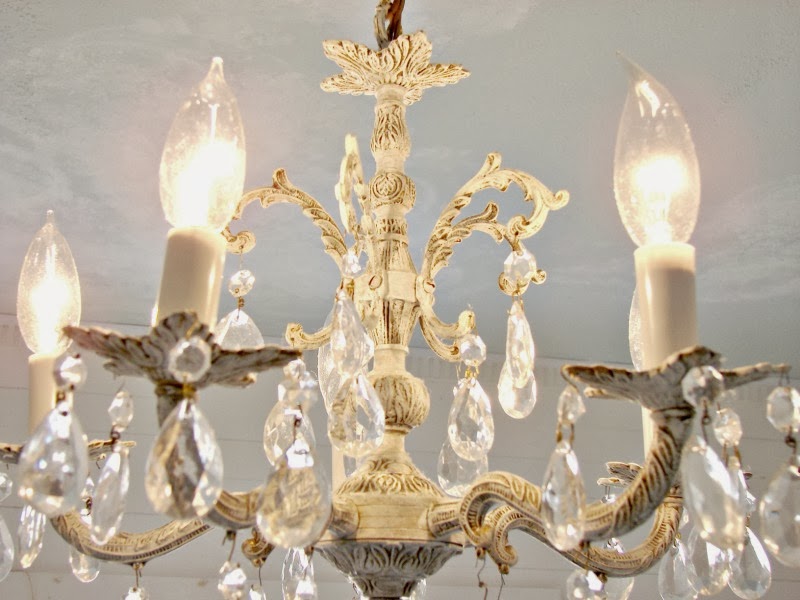 You might think I went out and bought a vintage chandelier specifically for the bath. . . .I didn't. . . .It was the result of my Pack Rat tendencies. . . .I had purchased it years and years ago at a yard sale. . . .had no place to hang it in the house I lived in then. . . .but, couldn't resist a bargain. . . .I knew somewhere along the way, I'd use it. . . .So, the chandelier began to travel with me, making every move--from Texas to Arkansas to Virginia and back to Arkansas--boxed and waiting.

It was an ugly antique brass. . . .That had to go. . . .I dry brushed it an off-white. . . .There were a few crystal prisms that came with the fixture. . . .not as many as you see here. . . .I only recently added lots of extras. . . .and will probably add more as I find them at a reasonable price. . . .This past year or so, I left off the crystal, thinking it really might be too much for a Delta farmhouse. . . .I missed them--the sparkle, the warm glow they cast on the ceiling. . . .When I found the extra prisms at a local flea market, I knew I was ready for a little elegance again--as a contrast to the simple bath. 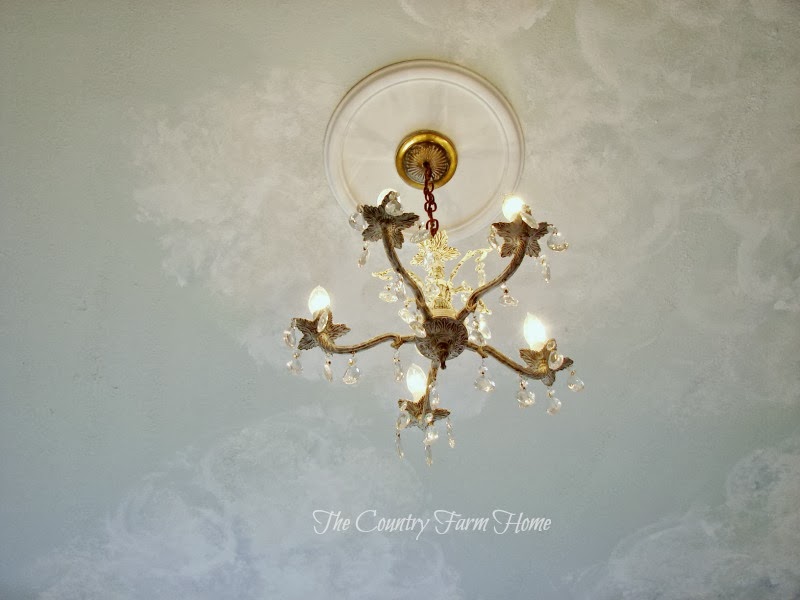 With Shabby Chic and French Country influence accepted these days, I don't think anyone is as shocked about the chandelier. . . .What they smile about now are the clouds. . . .Don't you feel as if you're looking up at the sky?

Painting the clouds on the ceiling was a piece of cake. . . .I did them myself because the contractor was having such a hard time wrapping his head around it. . . .All I did was grab a sponge and some white paint. . . .easy on the paint. . . .making a dabbing and swirling motion. . . .so easy. . . . 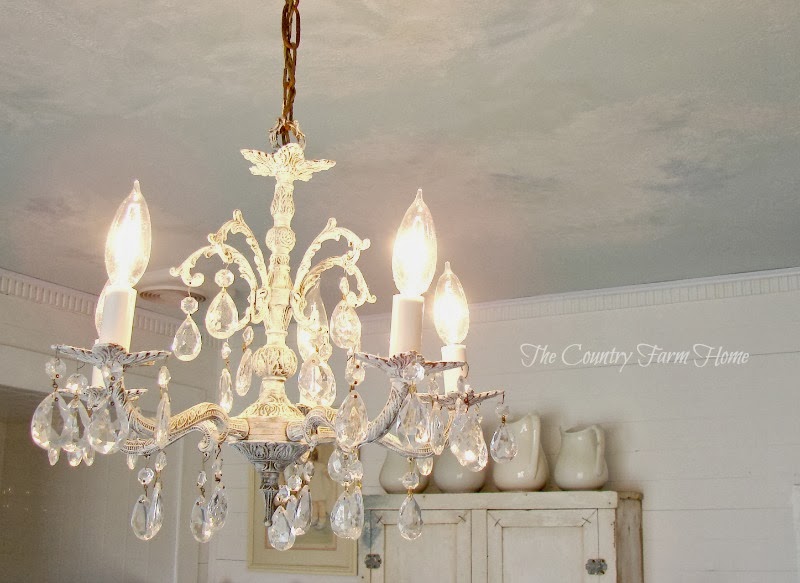 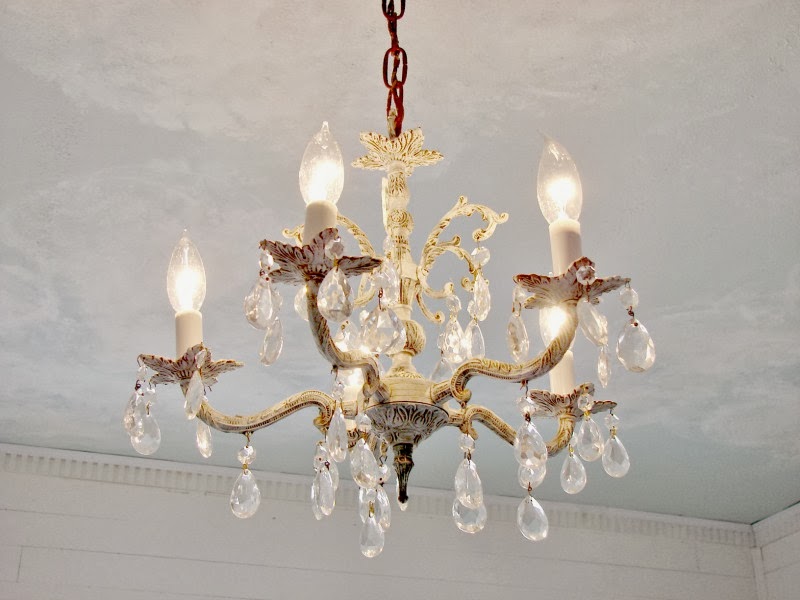 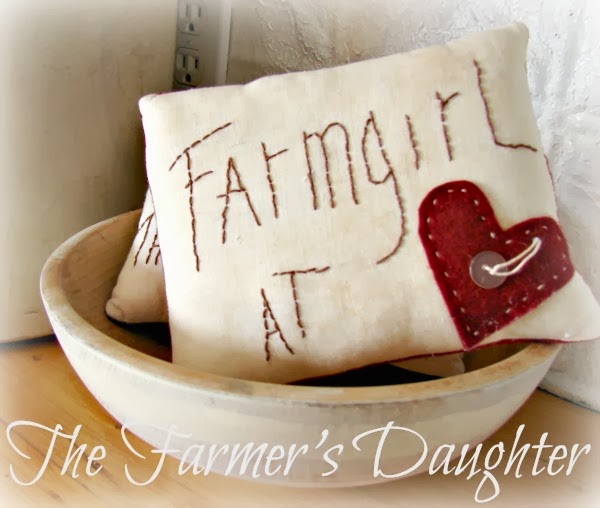 Lovely! I love your cloud on the ceiling touch. And your chandelier certainly does add warmth and sparkle. I haven't been much of a chandelier fan, but recently I am learning to appreciate them. I got a good look at a friend's original 1930's glass chandeliers and was enchanted!

I just love your chandelier and the sky ceiling! It adds a touch of glamour to your country bath. My friend just moved into her new home and put a small chandelier in the master bath. It looks sweet. I have a box of crystals from an antique chandelier and wish I had one to hang them on. Oh, and a place to hang it too. :)

I love your bathroom!! I have one of those chandeliers sitting in my closet just waiting to be put in the right place. Thanks for the idea about the white paint to spruce it up. What kind of paint did you use??

Dru
It looks like the perfect room to soak and relax it.
I'm with you, there are no rules, only what we want and love!

Dru,
I love your rule #1. Great rule to live by. I love your blue sky ceiling with clouds floating and a pretty chandelier right in the middle of the sky. How heavenly and so so beautiful as you soak in a tub. Just awesome and pretty. Love your bathroom.
Kris

That chandelier is gorgeous and for the bathroom?? ABSOLUTELY YES! I would love to see a pic of the entire bathroom if your camera can get it, it looks fabulous1

I love that there are no rules in decorating. If you love it then you live with it and it is perfect. Love your clouds and your chandy. I painted clouds on my daughter's bedroom years ago (ahem 22 years to be exact) and grass and flowers on the wall. Everyone thought I was a bit touched.
Your bathroom is just gorgeous ;-)

Beautiful and yet I have one in my dining room that I detest...maybe I'd like it better in my bathroom? LOL! You did a great job on the ceiling too.

Love your chandelier and the sky ceiling...so pretty!!
hugs,
Cindy

I love your beautiful chandelier in the bathroom!! I tried to convince a friend years ago to hang a chandelier in her huge bathroom but she couldn't in-vision what I in-visioned ( it would have looked beautiful). The soft clouds look pretty too! When I was a teenager (a long time ago)my friend and I painted my bedroom walls and ceiling
sky blue with white puffy clouds and flowers growing up the walls.
Pam
scrap-n-sewgranny.blogspot.com

It's absolutely charming. And all the contractors I've worked with have rolled their eyes at each of my ideas! The one I'm working with right now on the kitchen project is going crazy!

Who wouldn't want to lie in a claw foot tub and look up at clouds and crystals? Your bathroom is absolutely charming!