BEFORE AND AFTER: This Old FarmHouse 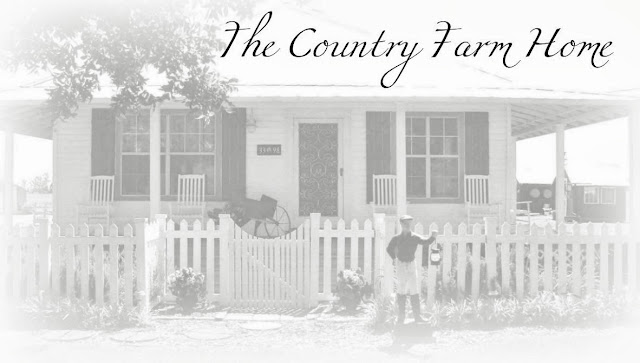 Well. . .here it is JUNE. . .and I am back as promised. . .beginning a series of BEFORE AND AFTER photos of our COUNTRY FARM HOME. . .It's been a journey that many of you have followed. . .but I've never shared the BEFORE images. . .In fact, I had forgotten myself what a change we have made.

But before we get to the interior. . .I wanted to share the exterior. . .I think it will help you to better understand the lay-out of the rooms. . .and how we made changes that would compliment our HISTORIC DISTRICT while meeting our needs.

Built about 1930 by my Grandfather's specifications, THIS OLD FARMHOUSE has been home to many farm managers and farm workers. . .It began life as a FOUR-SQUARE CRAFTSMAN home with a porch across the front and back. . .all under one roof. . .Around 1950 the right half of the front porch was added to the LIVING ROOM. . .Then in the 1960s, the left half of the porch was added to a the front BEDROOM. . .Pretty box-ey looking, isn't it? . .But, it served it's purpose well for many years. . .

The original BACK PORCH was also incorporated into the house as you see in the right photo above. . .When the house was built in the 1930s, there was no BATHROOM. . .Some time through the years, a bath was added on the left side of the old porch. . .In fact when we took over the house, the bathroom still had the slight slope of the porch floor . . .They made-do. . .Always. . . 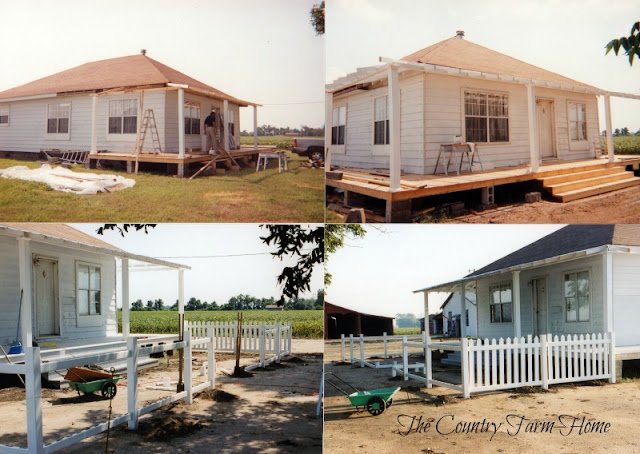 THE PLAN:
I have renovated many older homes in my lifetime. . .Each time I tried to keep the integrity of the house, based on when it was built, in what region it was built, and the general history of the families who had lived there. . .When John and I moved back to Arkansas with a plan to save this part of our FAMILY LEGACY--and salvage some of the local DELTA FARM HISTORY--we knew we wanted to restore all of the FARM BUILDINGS as close to the original as possible. . .A survey team came from the DEPARTMENT OF ARKANSAS HERITAGE in Little Rock to assess the buildings and to recommend the farm complex to the NATIONAL REGISTER OF HISTORIC PLACES. . .They determined the buildings to be of FOLK CRAFTSMAN STYLE, the manager's house included. We had already started the renovation of the home, but our plan fit into the farm's style, especially since we would be keeping the interior rooms in the ORIGINAL LAYOUT.

THE FINAL PLAN was to add a WRAP-AROUND PORCH on three sides. . .reminiscent of several other houses in this area. . .A WHITE PICKET FENCE was also in the plan. . .For years I had said that one day, I'd have one. . .So the porch and the fence came first. . .These were two things John and I felt we could do ourselves while waiting for the carpenter to start the other additions. . .We were totally out of our comfort zone but determined to be very hands-on with our projects. . . 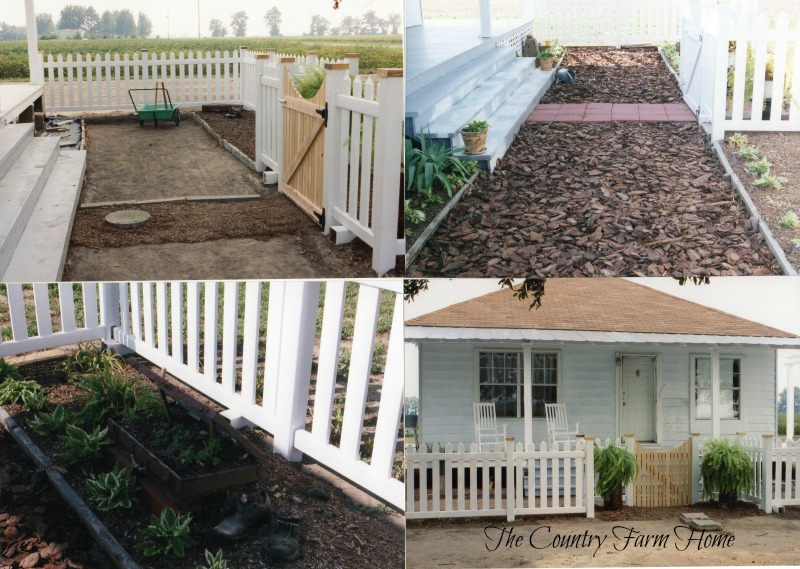 After many trial and errors, we had the white picket fence in place. . .I then started the FLOWER BEDS. . .There were numerous plants and flowers at my parents home that I wanted to move to the farm. . . HERITAGE PLANTS of the 1930s-50s. . .Day lilies, iris, roses, mums, jonquils, daisies, wisteria, crepe myrtle. . .not all were planted in the front garden beds. . .but quite a few. . .Over the years I've learned where each grows the best. . .where my non-green thumb and the boll weevil spray (for the cotton fields) don't kill them. . .So you'll see them scattered all around the farm. 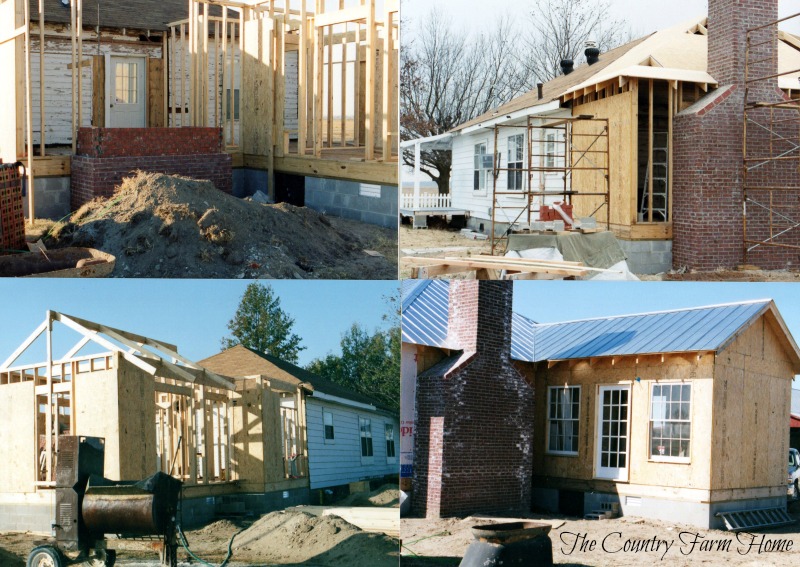 Finally the last of 2006, we had a carpenter!!!!. . .Construction got underway. . .The interior room layout would remain the same, with the exception of the old back porch/bath. . .The bath moved to the middle third bedroom. . .The old porch was then opened up to the kitchen and an additional ten feet added to it (upper right) for KITCHEN/KEEPING ROOM that would measure over twenty-six feet long . . .An OPEN HEARTH FIREPLACE was added, as well as a BREEZEWAY off the back of the kitchen/keeping room. . .I remembered the breezeway at my Grandmother's house. . .It was the place that she did a lot of bean shelling and butter churning. . .It's a room that usually isn't heated or cooled, where numerous windows and doors can be opened to catch a cool breeze during a hot day.

The BREEZEWAY leads to the DOUBLE GARAGE. . .Care was taken to construct the garage to look as if it was a CARRIAGE HOUSE. . .with track farm doors. . .The actual entrance to the garage is discreetly hidden from the road.

Of course, a METAL ROOF was added. . .What DELTA FARMHOUSE didn't have one? . .Very few. . .And new WHITE SIDING brought the old together with the new as if this house had existed for decades. . .John set to work on the WINDOW SHUTTERS. . .painting them RED to match the barns and buildings. . . 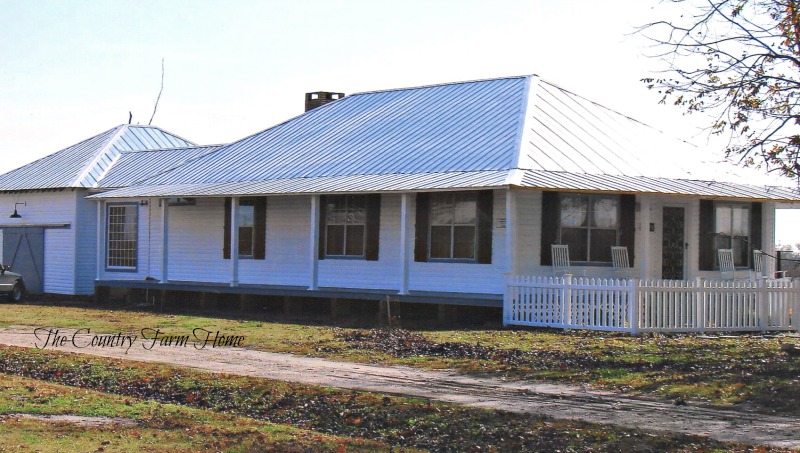 And, here is our COUNTRY FARM HOME  just a few months after the exterior completion in late 2007. . .The BEDROOMS and BATH are on this side of the house. . .the LIVING ROOM and KITCHEN on the other. . .It's amazing how much larger the house looks when we only added ten feet to it. . .The addition of the porch also gives the illusion of a larger home. . .We both wanted to keep it's integrity. . .and truthfully, I didn't want a large PLANTATION HOME. . .We live and work in all the FARM BUILDINGS. . .and feel that our 'home' encompasses those also. . . .I wanted the FARM to look and feel as it did when I was growing up. . .as if you've stepped back in time. . .to a SIMPLER LIFE. . .We are so blessed that we experience that each and every day. . .but it's a lot of work, too. . .Someone once commented it was a HOBBY FARM. . .Hardly. . .This is out and out hard work. . .(grin). . .We'll never finish. . .About the time we get caught up in one area, another needs our attention.

Although John and I did most of the interior work, it took years to get to this point because there were other needs that came first. . .The FARM BUILDINGS and BARNS needed much attention. . .For a while we were moving OUT-BUILDINGS around, building some from scratch, adding a LOG CABIN from the Ozarks. . .Let's see, we also moved the OLD COUNTRY STORE from Dell. . .had the Amish in Mississippi construct and move in three SHOTGUN BUILDINGS. . .Well. . .I'll just say that we have had few spare moments to work on our home. . .It was livable as it was. . .One of those things like the cobbler's kids having no shoes. . .

It's HOME now. . .Once you put much time and sweat into a project, it becomes a true part of your life. . .From the outside in, our HOME is a reflection of "US". . .

John and I do make a pretty good team. . .I have the ideas. . .He has the skill. . .(Did that make you snicker?) . .He is actually a very talented carpenter, as you will begin to see next time as we make our way inside. . . 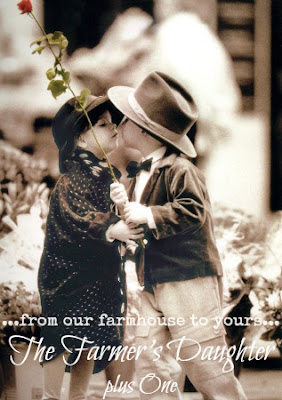 What an amazing transformation throughout the years, keeping with it's original charm! I'm in love. We have plans (Lord willing) to build on our son's property in TN and have been looking at farm house plans...so far, our favorite is the 4-square style with front and back porches! Just wonderful!

I really enjoyed seeing the transformation of your sweet farmhouse. You've achieved a lot over the years and I know a lot of hard work and love has gone into it. The wrap-around veranda is wonderful and I love your picket fenced front garden. Looking forward to seeing more of your lovely home. Enjoy!