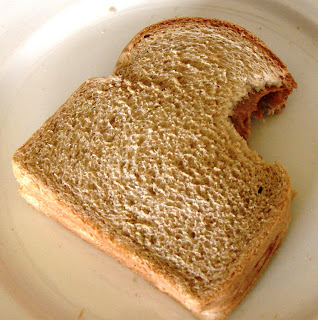 There's an art to making a peanut butter and jelly sandwich--or so says John--who eats one every night before going to bed.

He started eating peanut butter and jelly sandwiches when he was a small child. His Mom made him the sandwiches each night. He says he eats it now for two reason: to remember his Mom and to make himself feel younger. I suspect he also likes them--

He won't allow me to make the sandwiches for him.
He wants to make his own.
He says there's a technique to it that he has perfected over the years. 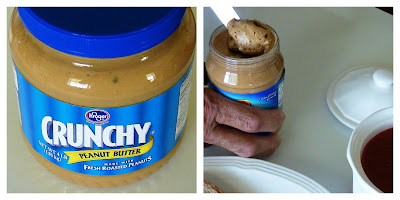 First Rule: Always use Crunchy Peanut Butter. It doesn't have to be a name brand.
Even a store brand will do as long as it's crunchy and it's easy to spread. . . 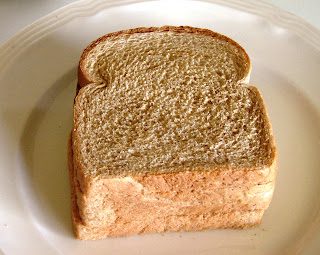 Rule #2: Whole Wheat or Multigrain Bread is your best choice. Along with homemade jams, jellies, and butters. (John loves pumpkin and apple butters.)
And, don't cut the crusts off the bread! They help hold the peanut butter and jelly inside the sandwich. . .

Ok. Ready to make one? 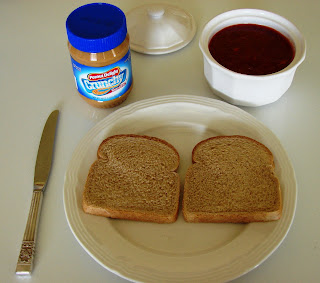 Open out two slices of bread so they'll match up perfectly
when you put the sandwich together. . .

Now, spread a THIN layer of jam or jelly in the same manner around the second piece of bread. . .
(He's using freezer strawberry jam because it spreads thinner. . .
Don't guess you have to turn this one as you spread?)

Put the two pieces together. . .
The peanut butter half ALWAYS goes on top of the jelly. ..
and. . .There you have it! 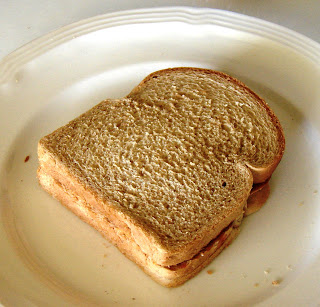 Last Rule:  Never, ever cut the sandwich in half--because the jam will ooze out.

Now, did you know all that?
I sure didn't. . .
To me it still looks like an everyday  peanut butter and jelly sandwich. . .
I don't see the difference. . . 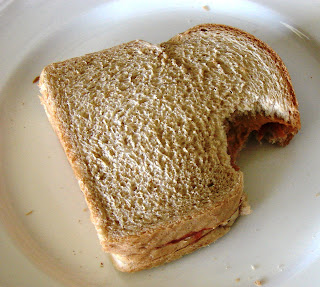 Maybe that's why he won't let me make him one?


We're sharing this post with all the nice folks at:
Rural Thursday
Posted by The Farmers Daughter

Just one thing missing. Lay's Potato Chips. Love the extra crunch. And yes, they go inside the sandwich. And lime green Kool-Aid to wash it all down.

Now I am hungry;-)
blessings, jilly

Hey, around my house I'm happy for DH to make his own PB&J sandwich. Frankly, he probably wouldn't get one any other way!

When I was preggo w/ my 1st I had really bad morning sickness, and I would eat a pb+j through the duration of every night. I'd wake up, take a bite, go back to sleep. Now I only eat them for breakfast before I run a race!

Now all he needs is a tall glass of milk! Tell Farmer John he did a good job making his peanut butter sandwich.
Thanks for stopping by and joining my photography site.

I loved this post. I had forgotten I use to love this combo. I haven't bought peanut butter for ages as my grandchildren favour vegemite or nutella these days. Must get some. I think it's so cute how your hubby does his sandwich. My hubby is Scottish, and always has his sandwich like that but jam only. Being English by birth(We now live in Australia) I like butter and jam together. Yes we don't like the sandwich cut either. :)

I love just the PB on my sammies, but this is such a cute post about your hubbies' preference.